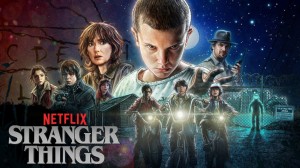 My husband and I have a guilty pleasure . . . Stranger Things is one of our absolute favorite tv shows out there. Before I begin, I want to warn you that there is a spoiler if you haven’t completed Season 2, so you might not want to continue.

As I read John 15 today, it immediately made me think of Stranger Things. In season 2, the Upside Down basically infiltrates the human world.

Strange things begin happening. A large pumpkin patch is completely dying without cause, and poor Will gets taken over by something dark. They describe it as a virus that is taking over its host. It’s not until much later they realize the virus is following a pattern, much like the growth of vines.

The Mind Flayer, the source, is supplying evil energy to both Will and the vines. By cutting off the source, the death and destruction caused by those connected to the source will stop.

You might be wondering how this ties into scripture. John 15:5-6 says, “I am the vine; you are the branches. If a man remains in me and I in him, he will bear much fruit; apart from me you can do nothing. If anyone does not remain in me, he is like a branch that is thrown away and withers; such branches are picked up, thrown into the fire and burned.”

Remember the Upside Down is the exact opposite of the human world. So if we look at the scripture above, it’s talking about the same thing we see happening in season 2 . . . except opposite.

God is telling us that if he is our source, we will bear much fruit. Essentially he is saying we will live, and everything we touch will live. However, if we cut ourselves off from God, the source, we are nothing. We will not carry God’s power with us if we are disconnected from him. Although he is not a Mind Flayer looking to conquer us, he is the source and gives us his strength, his joy, his peace, his power, his ability to bear fruit, and so much more.

What is Your Source?

There are only two sources that can feed into us. If you aren’t sure what source you’re pulling from, look at the type of fruit you bear. To do this, you look at how you influence others, and yes you are at some capacity influencing others. How do you make others feel when you’re around them?

Are you drawing from the Upside Down or the Rightside Up?

If you realize your source comes from the Upside Down, it’s time you cut off the source and plug into the Rightside Up, God, who sent his only Son just so you could call him your source. It is through him you will have life and the ability to greatly impact those whose paths you cross along the way.

Join 1,187 other subscribers
Follow Misty Fitch | Fearfully Made on WordPress.com